Skip to content
U.S. Air Force F-16 Fighting Falcon pilots assigned to the 480th Expeditionary Fighter Squadron from Spangdahlem Air Base, Germany, prepare to take off from the Fetesti Air Base, Romania, in support of enhanced Air Policing mission April 9, 2022. Aircraft and crews have been working closely with NATO partners and Allies in the Black Sea region to reinforce regional security during the current tensions within the European theater. U.S. Air Force photo by Tech. Sgt. Maeson L. Elleman.
Expand Photo 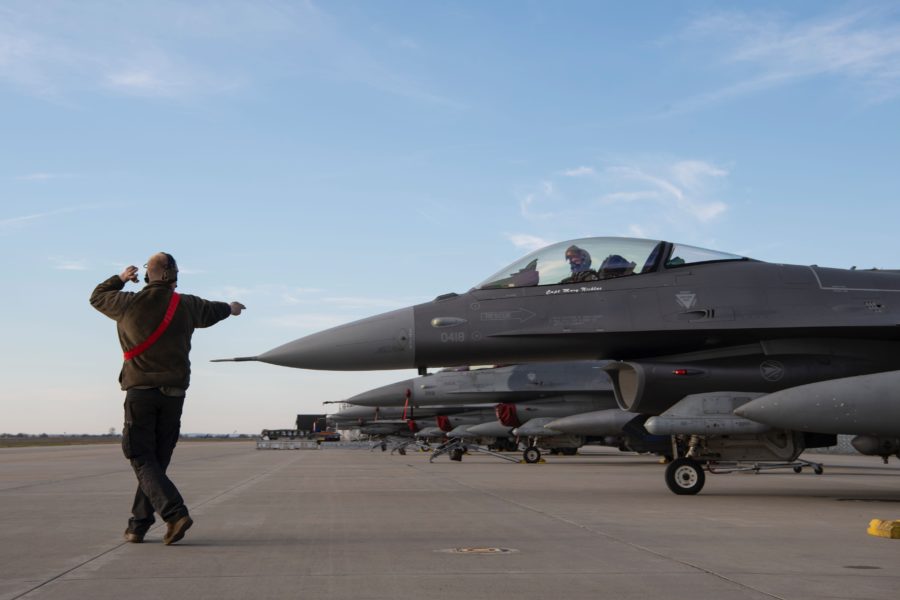 The 480th Expeditionary Fighter Squadron at Spangdahlem Air Base, Germany, answered the call. They had one week to deploy to Romania with eight F-16Cs, 150 service members, and a million pounds of equipment. Seven days later, they were flying.

“We had to plan airlift, plan ground movements, we had to plan the layout of everything within a week,” he said. “So, when you talk about that agile combat, we were able to do that before the jets landed, and we started running.”

The 86th Air Base, as Fetesti is also known, also received a rotation of two F-35s as part of the air policing mission in mid-February.

Romania is rapidly building up this base with new construction, but it’s not yet ready for new tenants. There are only hangers to accommodate the Romanian F-16s, so scheduling maintenance is hard.

Still, the Black Sea ally was eager to welcome the added air power. Romania cleared out a building, initially provided all the aircraft fuel, and shared the few spare parts that coincided with their own earlier model F-16 Block 15s.

The 30-year-old U.S. aircraft require regular maintenance on wiring and computer systems to stay fully operational. To limit downtime during the five-day wait for spare parts, an aircraft is designated to be “cannibalized” for parts.

NATO began enhanced Air Policing over the skies and Black Sea coast of Romania and Bulgaria in 2014 when Russia invaded Ukraine. The mission differs from Baltic Air Policing, which began in 2004, and protects the Baltic nations of Lithuania, Latvia, and Estonia, which do not have their own combat jets.

“We’re here just on the enhanced part of that air patrol, an extra visible and forward symbol to show U.S., Romanian, and NATO unity,” Parks said.

“Because of the info exchange, the experience exchange,” with USAF pilots, “… our troops get kind of like a second wind going towards progress,” said Romanian Lt. Alex Nasturel.

Fetesti Air Base is just over 50 miles from the coast of the Black Sea, which is now threatened by a heavy Russian air- and sea-presence. Non-Black Sea NATO ships are forbidden from entering during wartime due to the Montreux Convention, and U.S. intelligence, surveillance, and reconnaissance flights over international air space on the Black Sea are believed to have ceased.

With Putin repositioning his troops in the east and south of Ukraine, Romania has also begun to move armored vehicles and land forces to its border with Ukraine.

Small villages dot the expansive green fields near the Romanian 86th Air Base. Its symbol, the prickly-leafed pink thistle flower, protrudes through the grass in and around the base in the chilly spring.

Despite living at a hotel an hour away in Constanta, along a strip of beach crowded with bars and clubs, the Spangdahlem Airmen avoid the nightlife. Their focus is on mission.

Early the morning of April 9, before the 480th even began making its trademark jalapeno popcorn, Maj. Jared “Roam” Aschenbrenner and Capt. Sean “Sega” Sheldon were in a dark room watching slides and getting their “step brief” from Parks, who identified the Combat Air Patrol (CAP) zone in eastern Romania butting up against the border of Ukraine for the pilots to patrol. They would keep an undisclosed buffer distance from the border in accordance with NATO standards. Just across the Ukrainian border is the region of Odesa, thought to be a prime target in Putin’s quest to cut Ukraine off from the sea and grab a prized port.

The total time for the CAP was four hours, meaning the pilots would make a 10-minute commute to the center of the country to hit a tanker over the Carpathian Mountains before finishing their sortie and high fiving their replacement enhanced Air Policing pair before returning to Fetesti.

On their F-16C Block 50s were AIM-120 Advanced Medium-Range Air-to-Air Missiles, should they be needed. While air encounters have occurred between Russians and other NATO partners, Parks assured the Americans are trained to de-escalate. So far, the Russians have diverted after each intercept without incident.

“We’re here, we’re present, we’re showing that NATO’s borders are secure,” said Parks, who also flies patrols. “If an intercept has to occur, our primary job is to be de-escalatory. Let’s go out, let’s identify this person. Let’s make sure he gets turned around and back to whatever nation or host country that aircraft is out of.”

With the sun just over the horizon as the hour neared the 0815 departure, 17 maintainers stood back from the two aircraft. Their job was done.

The aircraft’s GE engine had been roaring for some 40 minutes as all the checks were run. The chalks were pulled, and the two jets began to taxi, one behind the other. In minutes, they were airborne, launching in quick succession, then banking slightly left and rising almost vertically into the orange-hued clouds.