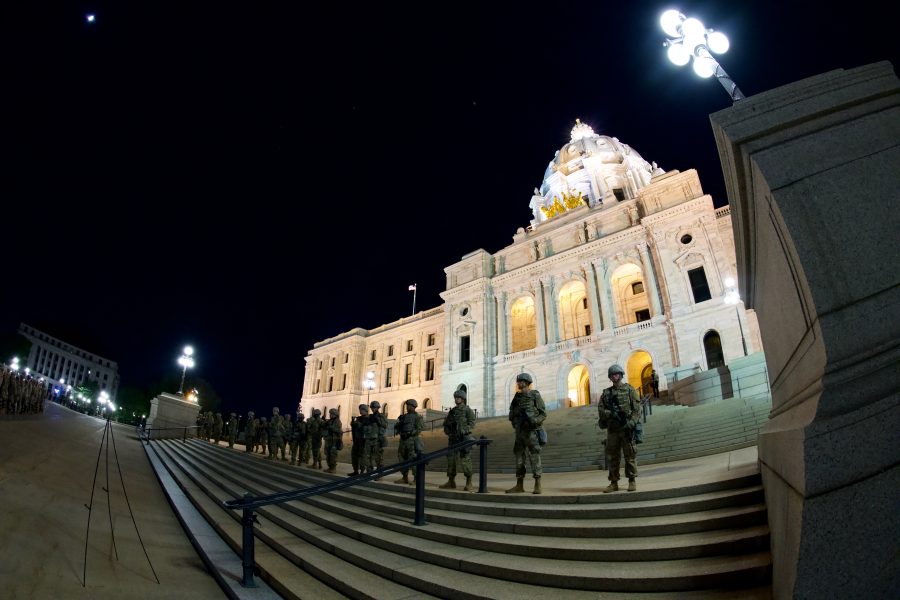 About 5,000 National Guard personnel—including more than 375 Air Guardsmen—in 15 states and in the nation’s capital had been activated as of the morning of May 31 “in response to civil disturbances” that erupted after the death of George Floyd, according to the National Guard Bureau. An additional 2,000 Guard forces were on deck if the situation demanded, the bureau noted.

Guard troops are now on State Active duty in:

The District of Columbia Guard is also activated under Title 32 orders.

“The situation is fluid so those numbers can change rapidly,” an NGB release stated.

Floyd, who was black, was pronounced dead at a Minnesota hospital on May 25 shortly after an arrest during which a white police officer kneeled on Floyd’s neck for several minutes, despite pleas from the handcuffed Floyd that he was struggling to breathe. The situation was captured in a now-viral video clip.

The officer, Derek Chauvin, has since been fired and charged with third-degree murder and second-degree manslaughter.

Since Floyd’s death, the public’s response across different parts of the nation has run the gamut from peaceful demonstrations and graffiti to looting and the burning of buildings and police vehicles.

During a May 31 telephonic press conference, the adjutants general of Minnesota, Colorado, and Georgia detailed the extent of ANG involvement in each of their states’ responses.

As of the time of the press conference, 48 Minnesota Air National Guard were in the Minneapolis-St. Paul area helping to respond to the unrest, Minnesota Adjutant General Army Maj. Gen. Jon Jensen told reporters.

The state ANG’s support to the response has thus far included:

Jensen added that Minnesota Guard Soldiers and Airmen supporting the response are carrying ammunition in their magazine pouches due to a threat intercepted by the Federal Bureau of Investigation last week.

Air Force Maj. Gen. Michael Loh—Colorado’s Adjutant General and President Donald Trump’s nominee to succeed Lt. Gen. Scott Rice as ANG Director—said Airmen from the Colorado Air National Guard’s 233rd Space Group from Greeley Air National Guard Station, Colo., are in the Denver Emergency Operations Center “providing that critical link between the Denver EOC, [which] is the main hub of what’s going on in downtown Denver, and to the fielded forces, both at the state level and also at the National Guard level,” he said.

Airmen are also providing about half of the Guard staffing at the state’s joint headquarters, he said. However, he couldn’t provide the total number of Colorado ANG personnel taking part in the current activation offhand.

According to Georgia Adjutant General Army Maj. Gen. Thomas Carden Jr., 45 Guard Airmen—including 39 from the 165th Airlift Wing out of Savannah, Ga.—are taking part in the response. He did not detail their tasks, however.

“This is a total joint interagency operation here, and our Georgia Air National Guard is doing a great job,” Carden said.

Editor’s Note: This story was updated on June 2 at 4:15 p.m. EDT to clarify that the District of Columbia Guardsmen were activated under Title 32 orders, since the district’s Guard is federally controlled.