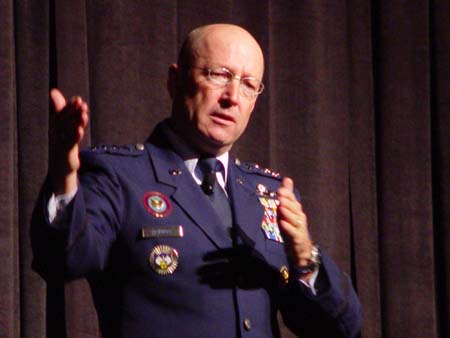 espite the relative low profile of the effort compared to the global war on terror in Iraq and Afghanistan, the US air defense mission, Operation Noble Eagle, continues at a robust rate, according to DOD’s senior uniformed homeland defense official. Over 48,500 ONE sorties have been flown since September 2001, Gen. Victor E. Renuart told the audience at AFA’s Air Warfare Symposium in Orlando Thursday, giving credit to 1st Air Force Commander Maj. Gen. Hank Morrow. With 40 fighters (primarily Air National Guard and Air Force Reserve Command) on alert at 20 locations across the country, every day Morrow’s Air Forces Northern scrambles an aircraft for missions as high profile as intercepting Russian bombers approaching North American airspace to checking on an errant Beechcraft flying along a route that approaches a nuclear power plant in Oklahoma. In addition, E-3 AWACS and tankers are routinely in the air to support ONE missions. There is an impression among some that ONE missions don’t get any “credit” as much as other operations, but the toll they extract on aircraft is just as real, and the costs should be treated as war on terror operations and not have to come out of the command’s normal operating costs, Renuart said. Striking the right balance on readiness and operations is critical when it comes to securing the nation’s airspace, he said.