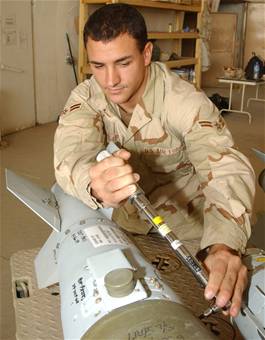 Since the combat debut of the Joint Direct Attack Munition, the weapon has been used more than 15,000 times and is a weapon of choice for airmen in the Global War on Terror. The JDAM is a tail kit that turns an unguided bomb into a smart munition, according to Air Force journalist SSgt. Ryan Hansen of the Air Armament Center at Eglin AFB, Florida. The JDAM will also be one of the first weapons to be Universal Armament Interface compliant, a new technology that will allow the Air Force and Navy to integrate new precision munitions upgrades onto aircraft without major chances to software.