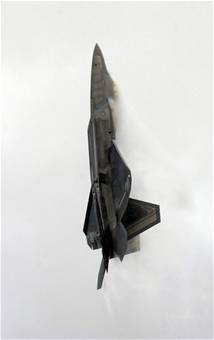 Lt. Col. Dirk Smith, commander of the 1st Fighter Wing’s 94th Fighter Squadron, the second F-22 squadron, said Raptors racked up only a 241-to-2 record in mock air-to-air combat with F-15Cs and Es, F-16Cs, and F/A-18s in Alaska earlier this year. So, how come two F-22s were “lost?” Smith, in an interview with Air Force Magazine Tuesday at AFA’s Air & Space Conference in Washington, says some of the pilots are fairly young and “highly aggressive—and we want them to be. They tried for that one extra kill” after they had expended all their missiles. Exercises, Smith added, are the place to experiment with tactics.