Tracking the Enemy with GSAT: 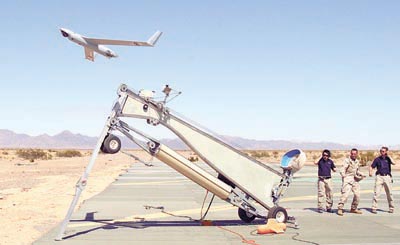 The 820th Security Forces Group at Moody AFB, Ga., has been selected as the first Air Force unit to deploy the Ground Situational Awareness Toolkit. The GSAT system, which consists of the Scan Eagle unmanned aerial vehicle and ShotSpotter gunfire acquisition technology, enables airmen to track enemy fire by using acoustic sensors to detect the location of the blasts. Sometimes the sensors can also identify the path of the blasts. The UAV then directs its cameras to the area, offering a view of the enemy’s location. Three airmen will undergo eight weeks of training at Clovis, N.M., prior to the GSAT’s arrival in Georgia in early March.