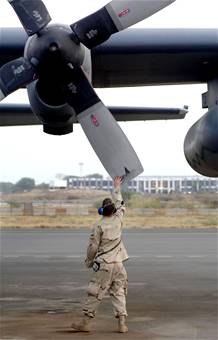 The Air Force has some 200 airmen deployed to the Camp Lemonier in Djibouti, Africa, to support US Central Command’s Joint Task Force-Horn of Africa mission to prevent conflict and promote regional stability. The Air Force contingent last week got a visit from Air Force Secretary Michael Wynne, who called the work they do there “a tremendous benefit.”