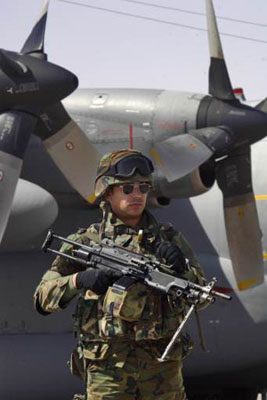 A group of 52 Spanish airmen and three Spanish Air Force C-130 Hercules cargo airplanes are at Manas AB, Kyrgyzstan, supporting Spanish and International Security Assistance Force troops in Afghanistan. Called the Mizar detachment, the Spanish airmen are providing intra-theater airlift—primarily aeromedical evacuation—while on a two-month deployment from Zaragoza AFB, Spain. The detachment, which is the second for the Spanish Air Force to Southwest Asia, has flown more than 350 missions, airlifted more than 15,000 personnel and 3.3 million pounds of cargo, and flown more than 2,800 hours, according to the Ganci Gazette.