Someone Has to Do Test Jumps: 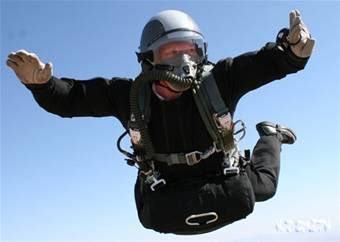 There is a group of enlisted airmen at Edwards AFB, Calif., who serve as the Air Force’s only test parachutists. Members of the 418th Flight Test Squadron conduct developmental test and evaluation of all DOD aerodynamic deceleration systems. “We’re here to test anything that might get jumped, bailed, or ejected out of an airplane,” MSgt. Donald Wing, program superintendent, told Air Force journalist Christopher Ball. To maintain their proficiency, the airmen must perform at least 150 jumps per year. Before they fly with any new equipment, they run it through a battery of tests from parachute drags to throwing dummies out of an airplane. During the actual test, they wear a reserve parachute, just in case.