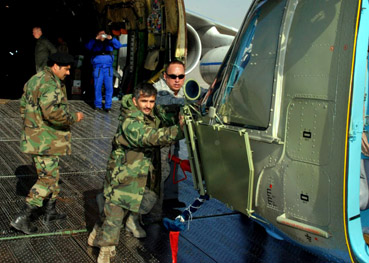 SAF airmen continue to help build and train airmen for Afghanistan and Iraq. Recently, US Air Force airmen helped unload parts of the first three of 12 refurbished former Soviet helicopters that arrived Dec. 5 in Kabul, Afghanistan. The US airmen also helped acquire the helicopters from the Czech Republic, as part of an effort to bring 200 aircraft to the Afghan National Army Air Corps by 2011. In an interview with Reuters news service last week, Brig. Gen. Robert Allardice, who leads the US effort to rebuild an Iraqi Air Force, said he doubted the fighters flown to neighboring Iran in 1991 would be returned to Iraq. Nonetheless, he said the Iraqi Air Force currently has some 60 fixed wing and helicopter aircraft that flew almost 300 sorties recently, up dramatically from earlier in the year. He said the Iraqi force would gain some “kinetic weapon” capability next year, but it would be a “number of years” before it will be able to handle its own air defense.