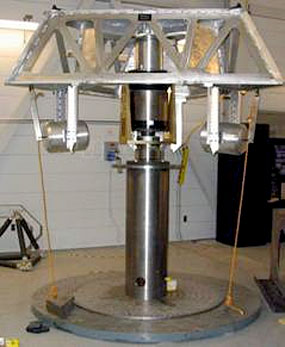 A team of eight personnel at the Air Force Research Laboratory’s Space Vehicles Directorate at Kirtland AFB, N.M., is working on a set of three flywheels that will demonstrate the technology of combined attitude control and energy storage on a satellite. They expect results by this summer. Rotating discs called flywheels have been used as spacecraft positioning devices but have not been considered for power purposes extensively. The Flywheel Attitude Control, Energy Transmission and Storage (FACETS) experiment contains a device that is similar to a car alternator, converting rotational power into electricity to operate payloads. The system has potential to benefit the Space Radar system, which needs high power levels during radar operation and which might otherwise be totally reliant on large chemical batteries.