Working Fast and Sometimes Outside Their Specialty: 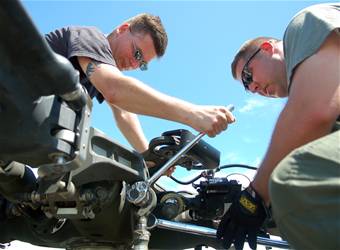 he medical personnel who deployed to the Dominican Republic as the second wave of support from Joint Task Force Bravo at Soto Cano AB, Honduras treated more than 2,000 patients in four days, reports SSgt. Austin May. The medics, airmen and soldiers, pulled together about 2,100 pounds of medication in 12 hours to make the trip to help islanders following Tropical Storm Noel. In a second report, Mays chronicles the versatility of airmen, writing about two Air Force medical technicians. Before the two airmen could employ their medical expertise, they pitched in to help get two Army Black Hawk helicopters ready to fly. “I’d never even ridden in a helicopter, let alone help put one together,” said SSgt. Robert Daly. Army helicopter mechanics tackled the technically challenging work, but they credited the airmen with shaving about two hours off the UH-60 generation time.