Welcome to Your New Home

Welcome to Your New Home: The 27 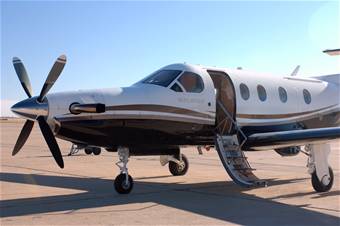 th Special Operations Wing at Cannon AFB, N.M., received the first of 10 PC-12 Pilatus light intratheater transport aircraft, known to special operators as the Non-Standard Aircraft, on Jan. 8. The wing’s 318th Special Operations Squadron, a new unit that will activate in March, will fly the single-engine aircraft. AFSOC spokeswoman Denise Boyd said the new unit will comprise some 90 airmen, but contractors will perform maintenance on the PC-12. The 27th SOW expects to receive a total of three PC-12s this year and have all 10 in place within the next four years at Cannon, a new Air Force Special Operations Command hub. However, Boyd indicated the rate of acquisition is tied to funding yet to be finalized. The aircraft’s attributes give it the capacity to operate from short and unimproved runway surfaces. The 312th SOS may ultimately operate three or four different airframes. The Cannon PC-12s will not have the classified modifications employed on AFSOC’s U-28, a version of the PC-12.