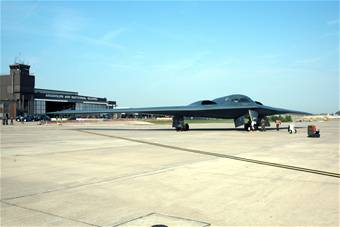 e Missouri Air National Guard’s 131st Fighter Wing got an up close and personal look at its future this past weekend, when the 509th Bomb Wing commander, Col. Greg Biscone, flew a B-2 bomber from Whiteman AFB, Mo., to the 131st FW’s home at Lambert airport in St. Louis. The fighter wing will be shedding its F-15s—a la BRAC 2005—in favor of sharing the B-2 mission with Whiteman active duty airmen. Some Air Guardsmen will transfer to Whiteman, but Col. Robert Leeker, 131st FW boss, says, “We’re too early in the planning stages to know when this transition will happen or how many people will move.” The St. Louis Guardsmen will be the first reserve component to fly and maintain the B-2 bomber.