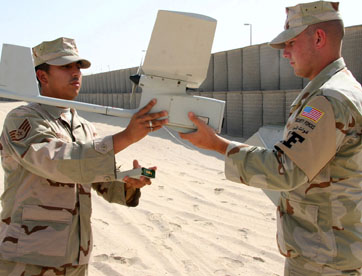 he 380th Expeditionary Security Forces Squadron in Southwest Asia has a new asset: the 35-inch-long unmanned aerial vehicle called the Raven B. MSgt. Ruby Zarzyczny reports that airmen, who are using the 4.2-pound UAV, with a wing span of 65 inches, for reconnaissance, surveillance, force protection, battle damage assessment, and convoy security missions, adopted the small UAV from the Army. Previously the airmen used the slightly larger Desert Hawk, but “its capabilities far exceed the previous air frame,” said 1st Lt. Daryl Crosby, with the 380th ESFS. For one thing, operators can launch Raven B from moving vehicles, roof tops, or any open area, and it can go to war in a backpack. It takes both still photos and live video.