No Shortage on Long Range 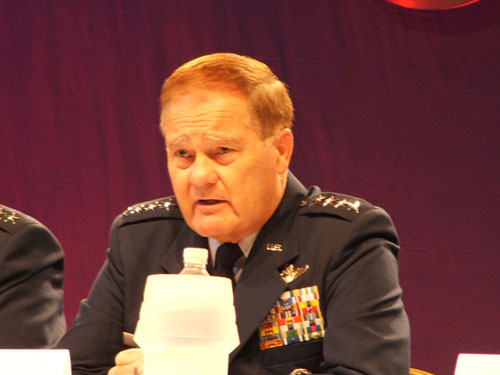 “I’ve got a hell of a lot of money in my budget” for the Long Range Strike program, Air Combat Command chief Gen. Ronald Keys told reporters Wednesday at AFA’s Air & Space Conference in Washington. Referring to the program objective memoranda process, or POM, which lays out the five-year spending plan, Keys said “This is not a hollow program.” Published reports have pegged LRS as getting $5 billion in the POM, which DOD wrapped up in August. Keys also said the program may be “black or dark gray,” meaning partially or entirely classified. Keys said the Air Force doesn’t want to give enemies any hints as to what LRS will be, but he did say it won’t be a hypersonic missile or launch platform. “It will look very much like what you or I think of as an airplane.” Asked if it would be akin to the proposed FB-22 bomber, Keys said, “I kind of doubt it,” suggesting the stretched F-22 variant wouldn’t be able to achieve the range and persistence called for in the requirement.