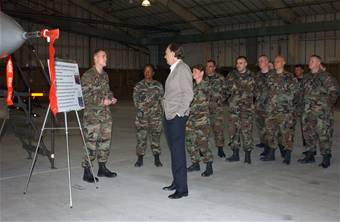 The Air Force has passed the 75 percent mark in its work to assess the potential of Cannon AFB, N.M., for a new mission. The service’s top civilian for installations, William Anderson, told House appropriators last week that he expects to have “a good analysis” of the base’s infrastructure, air space, and any environmental issues completed soon and a recommendation ready for the Air Force Secretary by this summer. Anderson noted, too, that a prospectus sent out to federal agencies already has sparked “indications of interest.”