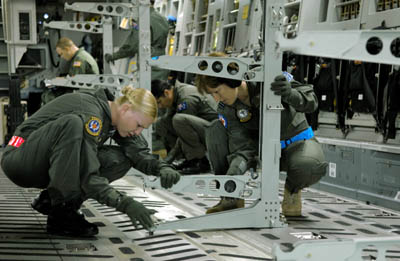 irmen from the 18th Aeromedical Evacuation Squadron at Kadena AB, Japan, traveled to Hickam AFB, Hawaii, where they have been training Royal Australian Air Force medical personnel on setting up a C-17 for aeromedical evacuations, reports TSgt. Chris Vadnais. The RAAF gained its first C-17 last year. According to Wing Commander Sandy Riley, RAAF health training staff officer, the RAAF airmen have aeromedevac “expertise,” but “the C-17 was rapidly introduced into service [in Australia].” He called the training provided by the 18th AES and Pacific Air Forces “invaluable.”