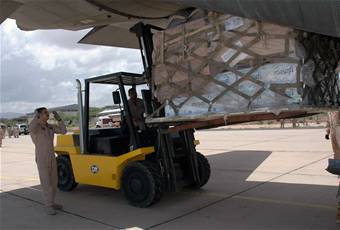 Air Force Reserve Command airmen deployed with the 746th Expeditionary Airlift Squadron in Southwest Asia recently were tasked to fly humanitarian missions to Ethiopia as part of Combined Joint Task Force-Horn of Africa operations. Deployed from the 913th Airlift Wing, based at NAS JRB Willow Grove, Pa., the Reservists share duties with three other AFRC units to fly weekly channel missions, deploying from SWA for several days to operate out of Djibouti. They transport military personnel and senior government leaders, as well as supplies and equipment.