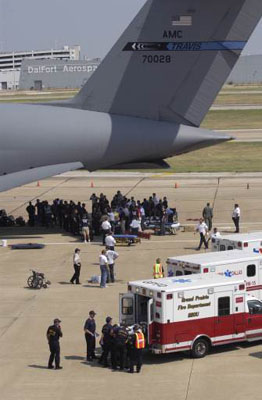 The 21st Airlift Squadron at Travis AFB, Calif., has flown its last flight abroad in the huge C-5 airlifter and will make its last local flight this week. The squadron and Air Force Reserve Command’s 301st AS are transitioning to the new C-17 airlifter. The 21st AS flew its last world mission to South Carolina to pick up supplies for Balad AB, Iraq; flew to India to pick up two Marine Corps helicopters and personnel supporting President Bush’s visit; dropped the marines off in Hawaii; then back to Travis. The 21st AS officially becomes a C-17 unit on April 3.