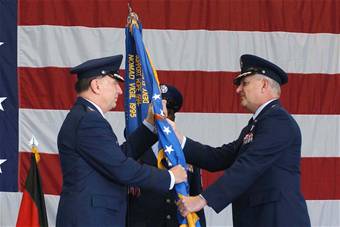 US Air Forces in Europe has reactivated 3rd Air Force, this time at Ramstein AB, Germany, not its old home at RAF Mildenhall, England. (We noted in early October that this resurrection was in the wind.) At the same time, officials inactivated 16th Air Force, but officials say the 16th legacy will continue through the 16th Air Expeditionary Task Force at Izmir AB, Turkey. Lt. Gen. Robert Bishop has taken charge of the revamped 3rd AF, which now comprises the 603rd Air and Space Operations Center, 603rd Support Group, 4th Air Support Operations Group, and some 1,400 personnel, many from 16th AF.