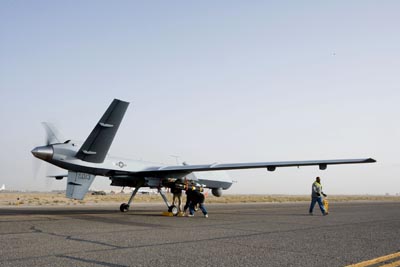 al Systems Center at Wright-Patterson AFB, Ohio, was the brains behind the quick operational fielding of the new MQ-9 Reaper hunter-killer unmanned aerial vehicle. Laura McGowan reports that ASC working with Air Combat Command accelerated fielding the new UAV by two years earlier than originally planned to meet a request from then ACC commander, Gen. Ron Keys. (The Reaper began flying missions over Afghanistan last month.) ASC personnel shepherded the UAV through the Integrated System Exercise 1 to demonstrate operational readiness. The Reaper team is working through ISE 2 now in preparation for initial operational test and evaluation. Once the system completes IOT&E, it can go into full rate production.