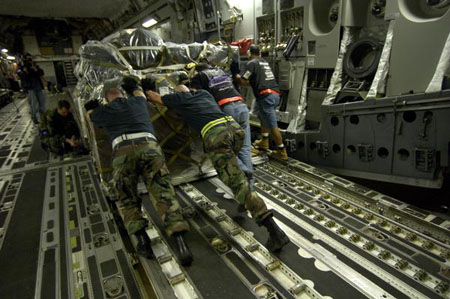 With its first new C-17 awaiting replacement of a backup computer system, the airmen at Hickam AFB, Hawaii, who will operate the new airlifters as part of a joint active-Guard endeavor, flew their first real-world mission with a C-17 from Charleston AFB, S.C. The active 535th Airlift Squadron and Air National Guard 204th AS flew a humanitarian mission to aid victims of the Philippine mudslide. According to the Honolulu Star-Bulletin, the replacement computer arrived before the rescue mission launched, but Hickam officials elected not to slow the effort further. As the Hawaii base gains its full complement of eight C-17s, it will also maintain a store of spare parts, including the aircraft’s many computer systems. ANG pilot Capt. Jason Mills said that with the C-17, PACAF’s “response time … is going to be much faster,” adding that the new airlifter will “move more in one event” than the base’s C-130 tactical airlifters.