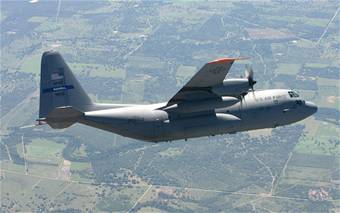 Flying over Lackland AFB, Tex., the first C-130 Hercules upgraded under USAF’s Avionics Modernization Program completed a three hour flight Tuesday. The aircraft is the first of some 350 Air Force C-130s to receive the AMP upgrade, which includes digital displays and a new commercial airliner-developed flight management system. All older variants of the Air Force’s C-130s will receive the AMP upgrade, leaving the service not with 14 variants but two—AMP and J models. Air Force Reserve Command’s 908th Airlift Wing at Maxwell-Gunter AFB, Ala., will receive the first batch of AMP C-130s. And, according to Col. John Jones, commander of the 908th Operations Group, having just the two models will simplify scheduling and operations, particularly during deployments “much easier.” If his unit has to substitute aircraft right now, it usually means having to find a crew trained in a different model, which can “disrupt the plans for several days of flying.”