No Air Op Without Aerial Refueling 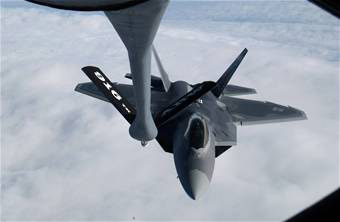 The 27th Fighter Squadron of Langley AFB, Va., flew its new F-22A Raptors in the fighter’s first real-world operation but not without help from the tanker guys. The Operation Noble Eagle mission also marked the first operational refueling of the new fighter. Honors went to the 18th Air Refueling Squadron at McConnell AFB, Kan. Boom operator TSgt. Chris Norris called it “kind of a big deal” since “the testing phase is done … and we’re making it official.” The 18th’s KC-135 offloaded 18,200 pounds of fuel for two Raptors during the eight-hour mission on Jan. 21.