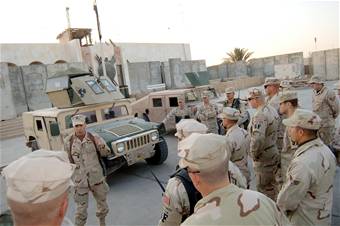 Vehicle maintenance airmen in Iraq have designed a new Humvee turret that they believe will provide more safety that they hope will prevent deaths such as that of A1C LeeBernard Chavis who was killed while on Humvee patrol in Baghdad. They named the prototype the “Chavis Turret.” According to Col. Gregory Marston, 447th Air Expeditionary Group commander at Sather AB, Iraq, there is “no standardization in terms of up-armored Humvee turret designs.” The group’s Security Forces airmen worked with vehicle maintenance airmen, who scrounged parts to build the new turret, which Marston believes has solved vulnerabilities of earlier models.