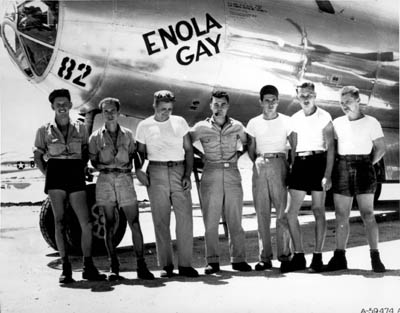 n. Paul W. Tibbets Jr., who piloted the B-29 bomber Enola Gay on its historic World War II flight to drop the first atomic bomb on Japan, credited with ending the war and saving thousands of American lives, died Nov. 1 at age 92 of natural causes. Tibbets entered the Army Air Corps in 1937 and, after graduating from pilot training in 1938, served first with the 16th Observation Squadron in Georgia. Following assignments as an engineering officer, he took command of the 340th Bomb Squadron and flew 25 combat missions in B-17s over Europe and North Africa, where he led the first heavy bombardment mission, serving under British control. He returned to the US in March 1943 to work on the B-29 program and, in September 1944, was placed in charge of developing an organization that would employ the atomic bomb in combat operations. He flew the first mission on Aug. 6, 1945, striking Hiroshima, Japan. At the end of the war, Tibbets served as a technical advisor on the Bikini Bomb Project and, in 1947, served at the Air Staff in the directorate of requirements. Subsequent assignments included work on the B-47 bomber and command of the Proof Test Division at Eglin AFB, Fla. His last assignment was on the Joint Staff. He retired in 1966.