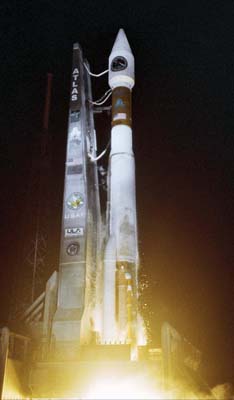 e-industry team launched the first of the new advanced communication satellites, the Wideband Global SATCOM, at 8:22 pm on Oct. 10. A United Launch Alliance Atlas V boosted the WGS into orbit from Cape Canaveral AFS, Fla. The WGS spacecraft will replace the Defense Satellite Communication System satellites, providing a 10-fold increase in communications capacity, according to a release from WGS-maker Boeing. The new sat began sending signals about 47 minutes after launch, and Boeing controllers in California confirmed it is “healthy.” USAF must conduct on-orbit testing before declaring it operational, probably in early 2008.