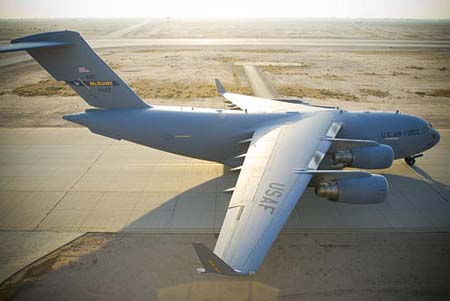 Air Force has released its list of unfunded requirements in Fiscal 2009, and it’s a whopper, amounting to approximately $18.75 billion in requests for scores of aircraft and platform enhancements, weapons, active-duty end strength increases, and even additional contractor logistics support. The Air Force says it needs these items to get closer to its Required Force of 86 fully modern combat wings to meet future threats and bolster areas like cyberspace, space surveillance, and nuclear security (see below). Neither today’s baseline budget topline nor those projected in the future will get the service there, thus the request for the shot in the arm. Among the highlights of the 152 itemized requests, USAF seeks 15 additional C-17s ($3.9 billion), four F-22s as part of Lot 9 production ($600 million) plus long-lead funding for 20 additional F-22s ($497 million). It also asks for five F-35s ($761 million) and advanced procurement funds for six additional F-35s in Fiscal 2010 ($67 million), eight C-130Js ($576 million), and five Global Hawks unmanned aerial vehicles ($616 million). There are also requests for one CV-22 ($82 million), two C-27Bs for Air Force Special Operations Command ($74.8 million), and 10 extra MQ-1 Predator UAVs ($80 million) to get the service closer to having enough of them to provide 24 simultaneous combat air patrols. An allotment of $385 million would allow the service to sustain its active-duty end strength at about 330,000, instead of continuing to draw down to 316,000. There is also $300 million requested for a classified requirement. Last year USAF’s unfunded requirements list totaled $16.9 billion.