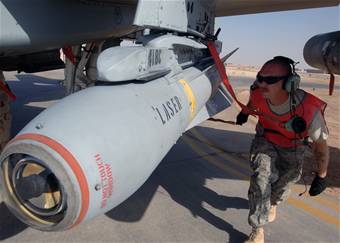 Maryland Air National Guard’s 175th Wing has been flying the newly upgraded A-10, the C model, in combat over Iraq for the past two months, the result of “a monumental effort,” says Lt. Col. Timothy Smith, commander of the 175th’s 104th Fighter Squadron. Smith says that the Air Guardsmen—pilots and maintainers—transitioned to the new aircraft just six months prior to deploying as the first C model unit to go to war. Gone are a pilot’s pencil notes on surrounding aircraft, replaced with a color digital display, a major boon especially at night, says Capt. Rich Hunt. The new Situational Awareness Data Link instantly shares data and camera feeds, shortening the “kill chain” from up to 30 minutes to a matter of seconds, says Lt. Col. Eric Mann, deployed from the 175th. The new Hogs employ the precision GPS-guided Joint Direct Attack Munition, enabling them to “pinpoint a building” and basically take it out “from the inside out,” says Capt. Brian Curland, the first pilot to drop a JDAM from the A-10C in combat. Basically, the new Hog is an even more lethal close air support machine. (Reports from TSgt. D. Clare and SSgt. Markus Maier.)