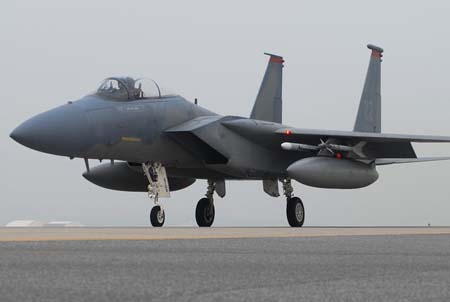 bat Command chief Gen. John Corley told defense reporters March 27 in Washington, D.C., that he’s “desperate” for hard data on which to make long-term decisions about the useful life of the F-15 fleet, in the wake of a three-month grounding late last year and early into 2008. The grounding followed the mid-air break up of an F-15 due to the failure of a longeron that had suffered too much stress over 26 years. Corley will get his wish: there are three studies underway. One is an “independent” review ordered by Pentagon acquisition chief John Young, who has dispatched a team to review records and interview maintainers, depot experts, and engineers across the service about what evil lurks under the Eagle’s skin. Another review is a fleet viability board, an internal Air Force look at the same issues. Third, Air Force Materiel Command is going to do destructive tests on two F-15s. One Eagle will be torn down so that a close look can be given to structures that are rarely inspected—if ever—because they were designed to last beyond the service life of the airplane. Extended service brings the health of those parts into question. Corley said AFMC’s first challenge is to choose “average” F-15s, neither star maintenance performers nor hangar queens, so the tests will not be skewed either way. The second F-15 will be put in a stress-test torture chamber to see how much more load it can bear before “enough is enough,” Corley said. He noted that in the original F-15 stress tests 30 years ago, only a main fuselage was tested; the nose was represented by a metal beam with a weight on it. Engineers expected longerons would be more than enough to hold the nose on in high-G maneuvers. After these reviews, USAF will be better able to say whether 177 F-15s can be kept in service through 2025, as is now planned, Corley reported. “At least four” of those found to have cracked longerons will be retired early, he said. “They will never see air again.”