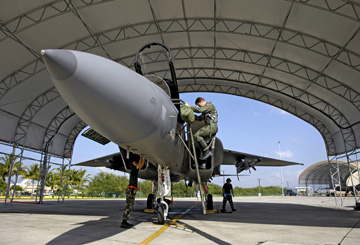 n Air National Guard pilot ejected safely from his F-15D on Friday afternoon during a training flight when he found he could no longer control the fighter and was losing altitude, reports the Honolulu Star-Bulletin. The two-seat version of the F-15 Eagle, which had just been cleared to fly recently following the Air Force-wide grounding of F-15 A-D models, crashed into the ocean about 1:37 p.m. The newspaper noted that the Hawaii ANG’s 199th Fighter Squadron still has seven of its 20—make that 19—F-15s grounded pending further review of the serious structural problems USAF has found in 162 Eagles. According to the newspaper, this is the first Loss of an F-15 by the 199th FS since it began flying Eagles in 1987. The Hawaii Air Guard stopped all training flights, but has kept its fighters on alert status for air defense missions.