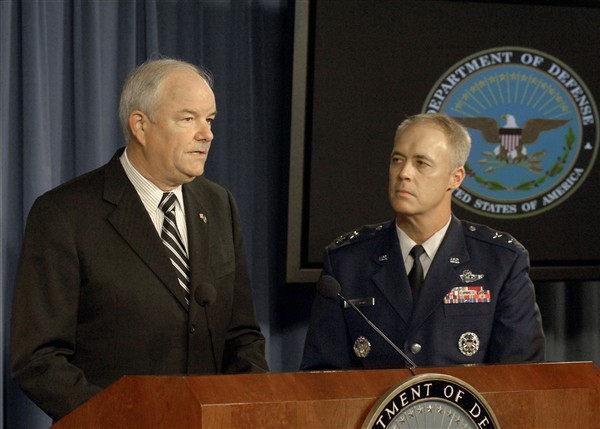 peaking with Pentagon reporters Friday, Air Force Secretary Michael Wynne said he was “making an exception, a one-time exception” in the long-standing policy to neither confirm nor deny the presence of nuclear weapons in an incident because of how “upset” the Air Force is with itself and the need to “restore confidence” after the August “Bent Spear” incident. Wynne went on to say that the August “improper and unauthorized transfer of six weapons” was “an unacceptable mistake and a clear deviation from our exacting standards.” However, he emphasized, before turning the briefing over to Maj. Gen. Richard Newton III, that “there was never an unsafe condition” with the nuclear weapons. Newton briefed the results of the investigation directed by then Air Combat Command boss Gen. Ron Keys, revealing that the Air Force had relieved four senior officers of their commands and has taken “four other specific actions to date” against officers at lower levels and numerous enlisted personnel. Read more below. (Press briefing transcript and sequence of events.)