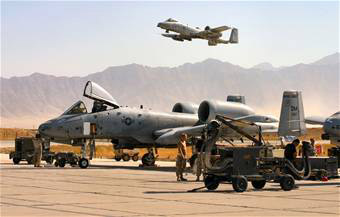 The A-10s of the 354th Fighter Squadron, Davis-Monthan AFB, Mont., have flown more than 1,700 combat sorties in Afghanistan since Sept. 15. “Our A-10s have provided non-stop presence and lethal firepower since we arrived,” says Lt. Col. Martha McSally, squadron commander. Clearly, as we reported here, air operations have increased over the fall in Afghanistan as well as Iraq. McSally credits the success of her unit’s ability “to seek out and destroy” remaining enemy combatants to the squadron’s close integration with conventional and special operations troops on the ground. She also says the “weapon of choice” for A-10 pilots is the aircraft’s 30 mm cannon because of its “pinpoint accuracy.” During 6,000 combat hours, the unit has fired more than 20,000 cannon rounds among other munitions, depending on proximity to friendly forces.